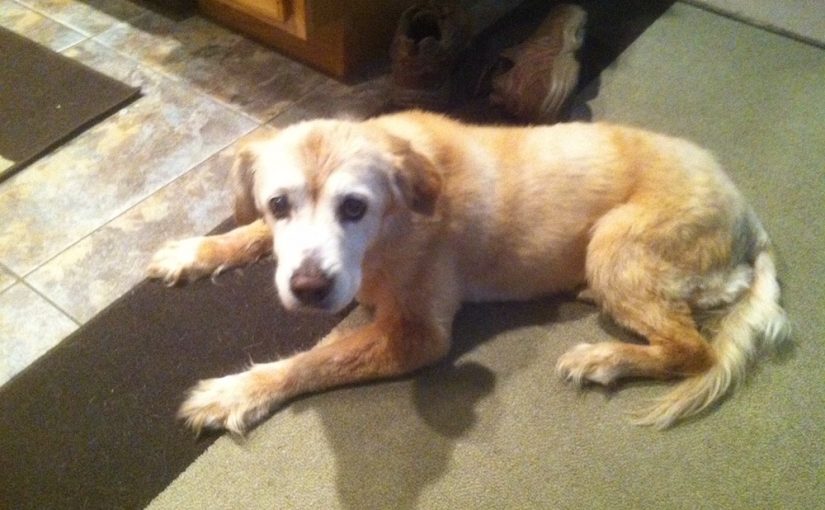 It Started with a Best Friend

One morning I let Scrappy, my loyal and loving companion, outside. I could tell immediately that something was wrong. She couldn’t lift her feet and was dragging her paws so much they were curled under her legs. I grabbed her up into my arms and rushed to the emergency weekend vet, convinced I was losing my best friend. We’d been through a lot in over a decade, and she was only 12 years old.

The diagnosis was pancreatitis; she had gotten into a taco left out on the coffee table and it made her gravely ill. They weren’t sure she would make it.

She did, but the vet told me this illness had an underlying cause: Cushing’s disease. My dog’s internal systems were producing too much of the corticosteroids cortisone and cortisol and they were wreaking havoc on my poor dog’s health. My doctor said although her Cushing’s wasn’t terrible, it was severe enough we needed to treat it. They suggested what was at the time the prevailing treatment, mitotane. We would need to let her fully recover from the pancreatitis first though since the treatment could be hard on her. That idea didn’t sit well with me, so I decided to do some research.

Cushing’s Disease with A Pharma Solution?

Conventional pharmaceutical treatments for Cushing’s disease are essentially chemotherapy drugs mitotane and lysodrene. In fact, lysodrene was used in the United States as a human cancer treatment until it was voluntarily removed from the market by its maker. The drug toxically affects the adrenal gland, poisoning it so that it can’t make as many corticosteroids. While they can be effective, they carry some pretty scary side effects including Addisonian crisis (a complete failure of the adrenal that causes even more serious maladies) and even sudden death. After coming so close to losing my best friend, I just wasn’t comfortable with taking the chance I could lose her because of the treatment for Cushing’s.

I began my quest to find another way to help Scrappy with something that had minimal chances of negatively affecting her. At the time using supplements to help Cushing’s disease was in its infancy on the internet; one of the first things I discovered wasn’t even related to dogs. I found several men’s health articles that described how a compound called phosphatidylserine could blunt the production of corticosteroids in athletes, so I gave it a try. To my pleasure and surprise, it really helped her—for a while.

In many dogs, Cushing’s disease is a progressive disease; one that only gets worse as time goes on. The phosphatidylserine helped Scrappy for a couple of years, but now it wasn’t enough.

Out of options, we tried the mitotane. It failed. A sonogram confirmed that Scrappy had possibly cancerous tumors on her adrenal glands that would likely end her life in months. My vet suggested that we either let her go (euthanize) or just try and make her comfortable until the cancerous tumors ruptured and she died. I promised I would make her happy and comfortable during the time she had left which thankfully turned out to be years.

Back to my research I went, spending hours upon hours scouring the internet, reading articles, joining forums, and chatting online. Soon after, I found Dr. Jack’s work on lignans and melatonin, a treatment many found to be successful. I also began to read several theories that Cushing’s disease was on some level an autoimmune disorder and the immune system was heavily dependent on beneficial bacteria that many dogs didn’t have enough of. I abandoned the phosphatidylserine treatment and put Scrappy on lignans and melatonin and it really helped her for a while.

As Scrappy’s disease progressed, the lignans and melatonin therapy stopped working as well. Her Cushing’s had progressed until it was really severe. We were out of options. And then it happened.

I ordered phosphatidylserine, melatonin and lignans from Amazon and combined them with organic peanut butter and powered cheddar cheese to make the first rudimentary CushAway.

The panting stopped first, then the crazy water drinking, and eventually, even her appetite that had been voracious for years, started to normalize. Was it working? Her skin, thin and weak with no elasticity for years started to improve. Her coat’s thin and bare spots, there for years, started to grow back. She even started to have more strength in her legs and hips, and her mobility, even at her advanced age (now about 16 years old) improved as well. I was also giving her probiotics to build up her gut health.

A visit to the vet left him taken aback. Critical blood work numbers had plummeted close to normal range. My vet wanted to know what I was doing. When I explained my basic CushAway treatment he said, “you ought to make this into a product.” I laughed it off—at first.

I wanted to share the idea behind CushAway everywhere I could (I still do), but measuring powdered ingredients and working the portions into a palatable mixture of peanut butter and cheese was more than the average pet owner could handle. As a chef, it was second nature to me. Could I make this into a product? I started to explore.

I found a manufacturer of human supplements that would help, but with a cost. I discovered that to make a marketable CushAway a reality, I was going to have to invest more than a year’s salary into lawyers, a website, manufacturing the product, and so on. My wife and I talked about it a lot. Finally, we decided that it was something that needed to be done. It was a product that needed to be out there for people who found themselves where we did with Scrappy. We wanted to help people who desired the safest yet effective treatment for their dog’s Cushing’s disease.

CushAway: More than a Dream

It’s been a leap of faith, but after two years of test marketing, we’ve seen the reactions from people whose pets we’ve helped, and we know we’ve done the right thing. Scrappy’s legacy continues when we pass on the treatment that helped her live a full 19 years. CushAway was a need, then a dream, then a hope and now, it’s a reality.